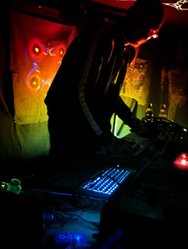 How it all began.

The Project starts as a three-headed Psytrance-Liveact launching in the mid-'90s, performing at several german Goa/Psytrance Parties and open airs. Their first single appears in 2001 called "Dua Orang", initiating a view releases on various compilations. In 2005 Spiritual Beings Records released the album "Groom Mountains" produced by Marcus which primary contains Psytrance, but also Tara Putra's first Ambient, Chillout and Dub tracks. The EP "Hidden Sense" pops up in 2010. This displays the projects future development with Psybient and Psydub - Creating space and psychedelic atmospheres in a dubby ambience. 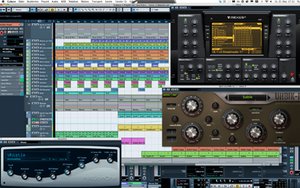 It's all about Sound.

In summer 2012 I gave an interview to the Euphoric Magazine India which should answer some questions:

Q: Most of the younger Ambient generation knows you as a Downtempo artist. Tell us more about Tara Putra. What kind of music have you been associated since the inception?

TP: Everything started as a Psytrance-liveact in the mid-nineties founded by two friends and me. We were infected by the Goa-/Psytrance-Virus so we joined the community. After performing on some festivals we started collaborating with a German label to release a vinyl EP and later on some tracks were appearing on several compilations. Some time around 2002/2003 we decided to terminate the project due to a heavy workload in our professions. After a one year break from producing music I have restarted working with Cubase because DJing didn't fulfill my desire. I was producing a lot of tracks and in 2005 Spiritual Beings Rec. released 'Groom Mountains'. It was still general Psytrance yet containing my first downtempo-experiments. Another long break followed and finally I produced more downtempo tracks resulting in an EP called 'Hidden Sense', released and promoted by the Ektoplazm netlabel. Then Gliese 581C Rec. released a view tracks (usually psydub/psybient) on compilations and in 2012 the album 'In Dubland' was completed.

Q: You have quite a taste in Travel and Photography. Whats your favourite destination in the world?

TP: That's a very difficult question and I can not give you a final answer! Varanasi (India), Vang Vieng (Laos) or Chefchaouen (Morocco) are very special places to me. I also had some real magic moments in Kashmir and felt in love with the Indonesian islands as well. India and Asia in general are awesome and it's definitely worth traveling there.

Q: Your new album, "In Dubland" sees in its cover, an awesome photograph of Mughal Garden in Srinagar. How do you connect with it?

TP: It was one of these special moments when I took this picture. The Mughal Garden has a very exotic and oriental touch primarily due to the filter applied.  During my visit in Srinagar I had been living on a houseboat at Dal Lake and each misty morning was like falling into a dream - no noise, not even a sound, only when a wooden fishing boat or shikara was passing by - highly surrealistic!

Q: You are known for your subtle yet deep basslines that have a warm feel to them. How do you think this bass is different from the ones in Dubstep?

TP: Well, it's a wide difference. In my dubs I try to build baselines which dominate the arrangement subversively, like they were the heartbeat of the track. The audience has to hear and feel it. Above all, I never use any effects on it only a clean sine wave.

Q: Tara Putra translates to 'Son of the stars'. What does it mean?

TP: It just means … not from this world. [grin]

Q: Your tracks see names such as 'Dubland mountains' and more recently, 'MonkeyIsland' (Affeninsel) and 'Dubland Coastline'. How do you associate yourself with nature?

TP: Certainly we are all part of nature.  I'm pretty much convinced about that. Yet, in our daily life with all its distortions, problems, responsibilities and abundance of material items which we don't necessarily need we tend to forget about it. That's why I'm biking in the forest whenever it's possible, enjoy the fresh air or just sit there and let my mind wander. The track name 'Affeninsel' implies that we all live on the same 'MonkeyIsland'.

Q: What is future Tara Putra gonna sound like?

TP: Mostly, the tracks will be heavily influenced by dub sounds but somehow it's difficult for me to define the sound well. Right now, I'm also producing some Ambient tunes as well as Psybient. It's hard to predefine a genre, because there are boundless possibilities. The upcoming release together with a friend from Gliese Rec. will be nothing but dub, including some Ambient tracks.

Q: What are your music influences? Are you trained in music? What about Sound engineering?

TP: There are too many influences to be mentioned. I'm listening to a lot of styles and different genres ranging from Ambient, Psybient, Darkpsy, Dub, Reggae to Indian Classic and Eastern European sound or Arabic music among many others. I'm an autodidact without musical education, only trained by myself. It's good to try new musical oddities as often as possible.

TP: Digital. Since I have a new computer on my desk all of the work was created internally. But it's a question of money and time as well. When we had played live, a lot of analogue synthesizer had been used. Their sound is amazing and it's fun to have your hands on various control knobs. But if time is limited or if you want (or need) to build a practical idea quickly a digital environment is brilliant.

Information in accordance with Section 5 TMG

The contents of our pages have been created with the utmost care. However, we cannot guarantee the contents' accuracy, completeness or topicality. According to statutory provisions, we are furthermore responsible for our own content on these web pages. In this matter, please note that we are not obliged to monitor the transmitted or saved information of third parties, or investigate circumstances pointing to illegal activity. Our obligations to remove or block the use of information under generally applicable laws remain unaffected by this as per §§ 8 to 10 of the Telemedia Act (TMG).

Responsibility for the content of external links (to web pages of third parties) lies solely with the operators of the linked pages. No violations were evident to us at the time of linking. Should any legal infringement become known to us, we will remove the respective link immediately.

Our web pages and their contents are subject to German copyright law. Unless expressly permitted by law, every form of utilizing, reproducing or processing works subject to copyright protection on our web pages requires the prior consent of the respective owner of the rights. Individual reproductions of a work are only allowed for private use. The materials from these pages are copyrighted and any unauthorized use may violate copyright laws.

Purple Hexagon is a label on the move, currently based in South East Asia and managed by italian dj Kikx. After years of building relations in parties around the world, in 2008 we decided to pool our resources and to create a brand new label that would not be tied to a specific place or group.

Existence Music is a independent Record label based in Toronto Canada.

Ektoplazm is a site devoted to psychedelic trance (psytrance), a distinct form of electronic dance music and a vibrant global counterculture. Founded in 2001 by Basilisk, Ektoplazm is now the world’s largest distributor of free (and legal) psytrance music specializing in high-quality Creative Commons-licensed content from netlabels and independent artists, all released in MP3 and lossless CD-quality FLAC and WAV formats. More than 7 MILLION full releases have been downloaded by music lovers all over the planet.

Ovnimoon Records is a label founded in 2010 based in Chile by Ovnimoon it is an independent sub-label of Goa Records from California/USA. Ovnimoon is the visionary producer whose name sake the label was based upon. All the music released with this imprint has passed his approval as true high quality gems of psychedelic goa trance.

Badgers Records is a free net label, based in Athens - Greece, dedicated to promote Dark Psychedelic Music. Music is our common language, connecting everyone, understood by all. Offering a ritualistic journey into the depths of your consciousness. It is more than entertainment…

Combining a synergy of visionary art, shamanic poetry and mystical worlds of hallucinogenic sound. Shamanic grooves for the new era of psychedelic travelling in multidimensional planes of awareness and otherworldly mystery.

Maia Brazil Records is a new label focused on the expansion and continuity of music bringing new trends, new talents and new concepts into the world at an international level.

Samana Records was founded in the year 2009. The label was founded by Swaroop Guhathakurta, the owner of SGDesigns. After receiving much acclaim as a digital artist in the psytrance genre, SGDesigns decided to extend their contribution to the genre by starting a record label. The label was born in the UAE but has its roots in India.However, it must be noted that the label caters to all electronic dance music and is not limited to psytrance.

Musical space planet, created for people of the Earth and helping them discover all dimensions of Trance, Ambient, Dub and Experimental music. Also our target - promoting various unknown/young/talented musicians releasing their musical vibrations for you in various free web releases including albums, EPs and conceptual compilations in various styles. We are working with CD releases too, making some limited and tasty things from expirienced and talented people.

C.E.Records was officialy founded on 19.02.2011 Cosmic Eclipse Records is a Label who promote young artists with fresh and quality music.

Mycelium Music is a record label, event production company and art collective with the objective of bringing attention to important global ecological issues. We utilize a cooperative model for all of our creations through emphasizing collaboration and live instrumentation. We hope to stem the tides of destruction caused by unconscious consumption by way of providing a much needed outlet for human energy through the mediums of music, physical practice, art, social networking and education.

Psyderweb Records is a psychedelic netlabel based in The Netherlands. We release free music by fresh and talented artists.

Spiritual Beings was founded in the beginning of 2000 as a non religious Spiritual temple. We gathered to bring more than music, literature, wardrobe, handcraft or any other merchandise or talent. We wish to deliver a message. We believe in a better world and we have gathered to build it together.

Founded in 1996, Nova Tekk was established as a media-distribution of CDs, LPs, music videos and merchandise. It released compilations and albums ranging is styles from techno, psychedelic trance, alternative, dark wave, reggae and sport on it's many sublabels.

Company shut down around 2002.

is the Art subdivision of Kunayala Productions.

In the early Sixties, a Swiss scientist named Hans Jenny experimented with the effects of sound vibrations on fluids, powders and liquid paste. Photographs of Jenny's work were as remarkable as his observations of the patterns which emerged.